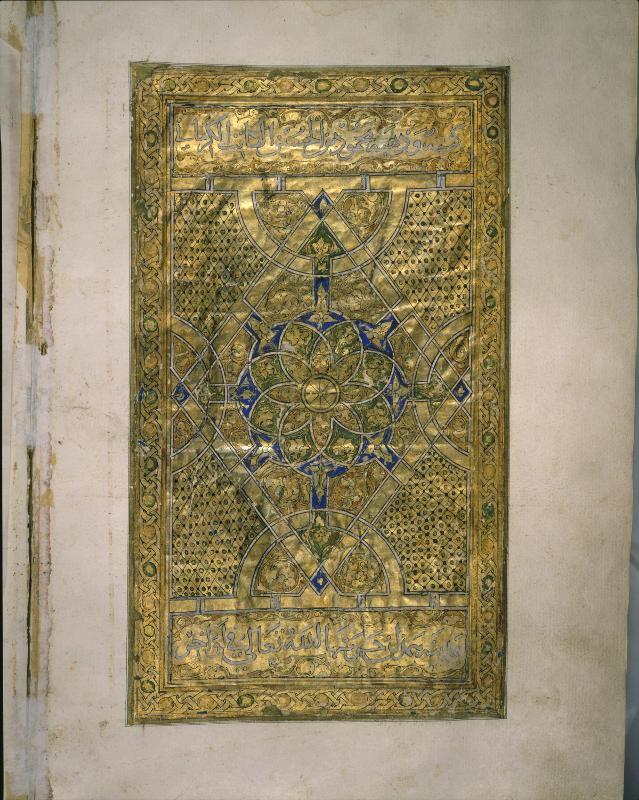 Pages rustle as a light wind flows through the open doors of a home. The sun’s crown peaks gently over the horizon, as a Muslim woman sifts through a weathered Koran, the holy scripture of Islam, her eyes navigating golden designs and elegant Arabic calligraphy. This scene could have very well occurred several hundred years ago with the Penn Museum Koran, an illuminated manuscript made in Persia in the twelfth century CE. To the trained eye, this volume offers a treasure trove of history, through its paper, calligraphic style, and illustrations. Its colophon, a small statement that gives information about the publication of a book, as well as the marginalia written by previous owners, also offer valuable information on this book’s creation and subsequent “career.” Penn Museum records tell its more recent history, including where this manuscript has “traveled” on loan since it entered the University’s collections in 1927.

The Penn Museum Koran contains only a small number of pages; it is not a complete Koranic text. Muslims commonly divide a single volume of the Koran into thirty booklets for ease of reading and to allow multiple people to read a single volume at once. One possibility, therefore, is that the Penn Museum Koran was intentionally created to hold a specified thirtieth of the total Koranic verse, called a juz of the Koran. Another possibility is that antiquarian bookdealers divided the Koran at some point in the past and sold the portions separately. The varying size of the unique calligraphic font written inside of it and the gold gilded illuminations surrounding the scripture make the Koran quite visually unique as well. The first two pages are written in Kufic Arabic script, while the rest of the manuscript is written in Naskhi Arabic script (Holod et al 2014). The Koran also has an Arabic commentary on the verse added much later in red ink.

The Penn Museum Koran hails from a very singular context and origin. The Koran comes from northwestern Iran, and was made, again, around the middle of the twelfth century. The illumination designs are a fine example of the work of artists who lived in the Seljuk Empire, which was ruled by Sunni Muslim Turkic (or to use more common modern parlance “Turkish”) men in parts of western Asia. An illuminated manuscript was usually made by a trained scribe and an illumination artist. Most of the time, these two roles were held by the same person. Highly influential and wealthy patrons would have paid handsomely to commission an illuminated Koran manuscript for personal use. Manuscripts from this time are very rare as few have survived to the present day, due to their fragile nature. This coupled with the fact that manuscript illumination and calligraphy are now largely lost arts, suggests the enormous cultural value of the Penn Museum Koran.

Internal evidence from the manuscript also suggests that this Koran traveled widely across the heartlands of the Islamic world in earlier centuries.  A clear colophon states that the manuscript was written and illuminated in gild in 1164 AD by Mahmud ibn El-Husayn of Kirman in Hamadhan, Iran during the rule of the Seljuk Empire. However, another later note states that the piece was given as a waqf, or pious donation, to the famous Al-Azhar Mosque in Cairo in 1786 by Amir Ahmad Jawish. Thus, the Koran was transcribed in Persia and found itself 600 years later in Egypt. In 1927, that is, one hundred and forty-one years after Jawish gave the manuscript to Al-Azhar, the Penn Museum of Archaeology and Anthropology purchased the Koran from Dimitri Andalaft, an antiquarian dealer based in Cairo who sold significant works of Islamic art to academic institutions across the world (Golombek 2013: 281).

Since acquiring the Koran in 1927, the Penn Museum has loaned out this manuscript on various occasions, and its images have been reproduced in several books of Islamic art. The museum loaned it to the Philadelphia Museum of Art, then called the Pennsylvania Museum, from 1932-33. It was not loaned again until 1974, when distinguished Professor Roger M.A. Allen of the University of Pennsylvania borrowed it. There is no record of Professor Allen’s reason, but he most likely requested the book to study it further personally or to enlighten his students in the classroom.  In 1976 it was shipped across the Atlantic to the Arts Council of Great Britain. It was then loaned to Penn's Van Pelt Library in 2002 to be exhibited in its Rare Book Room for the exhibit entitled,  “The Qu'ran: Revelation, Illumination, and Tradition”, and again in 2008 for an exhibit in conjunction with the “Historians of Islamic Art Association Symposium.”

The physical paper of the Koran points to a history of rich use and careful restoration. On closer inspection of the paper, one can detect multiple repairs using paper pieces of varying material (Holod et al 2014). One possibility, therefore, is that this Koran was not a mere display piece, but a working text used for personal devotion.

The calligraphic work reveals further idiosyncrasies about the manuscript upon closer scrutiny. Analysis of the calligraphy suggests that multiple hands created the original manuscript, as well as the several revisions and repairs to fading ink thereafter. It was likely that Kirmani, the official scribe for this manuscript, oversaw several journeyman scribes, but dictated the overall vision for the work and perhaps partook in its most difficult transcriptions or designs. The re-writing of the calligraphic headings and subheadings points again to a history of steady repair. Even the red commentary was redone, although again, the red ink was first added some time after the creation of the manuscript itself. Still, the fact that the commentary was redone suggests that scribes applied it early in the manuscript's life and that subsequent owners deemed it worthy of repair (Holod et al 2014).

The main objective of the red script was to elucidate difficult words and ambiguous sentences in the Koran. However, the commentary is not particularly thorough as several such words and sentences are skipped, while more easily comprehensible portions of the Koran are annotated. Perhaps this red script offered a personal reflection of the verse and was not intended as an exhaustive analysis for study of any kind (Holod et al 2014) – pointing to the role that this manuscript was likely to have played for the personal study and devotion of its owner.

In conclusion, the Penn Museum Koran, which was copied in Iran and spent some time in Egypt before entering the University of Pennsylvania's collections, is a vibrant work with an illustrious biography. Its descriptive colophon, singular paper and calligraphic composition, and long loan record since its arrival at Penn testify to its deep cultural value and enduring appeal.

Cole, Blake. "An Illuminating Experience."Penn Arts and Sciences Magazine, May 24, 2013.