Manuscript of Yusuf and Zulaykha 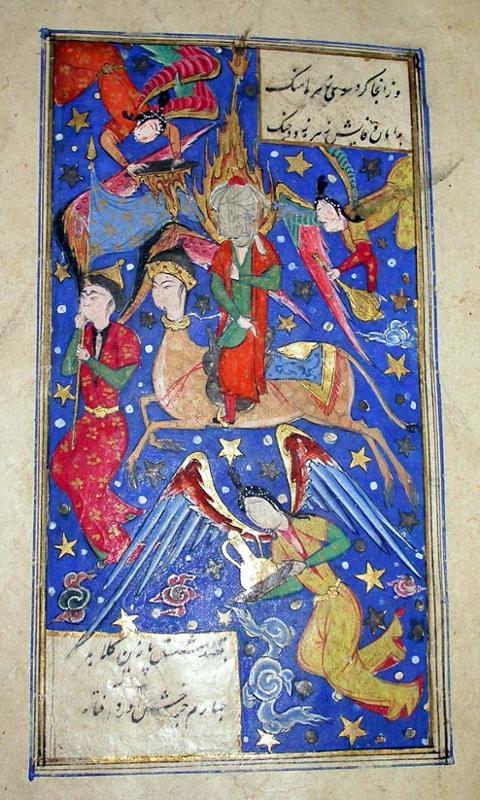 Manuscript of Yusuf and Zulaykha by the Poet Jami (1414-1492 AD), Penn Museum Object NEP31 From the Collections of the University of Pennsylvania Museum of Archaeology and Anthropology

The University of Pennsylvania’s Museum of Archaeology and Anthropology has a vast wealth of artifacts from the Middle East as a result of numerous late-nineteenth and early-to-mid twentieth-century excavations. In Iran alone, for example, the Museum sponsored work in Iran in Tepe Hissar, Chesm Ali, and Hasanlu. Nevertheless, one of its most valuable Iranian holdings, a work of Islamic literature that dates from approximately 1414 A.D, was not actually excavated by the Museum. The museum bought portions of the Persian illuminated manuscript of Yusuf and Zulaykha, as well as several other artifacts including Koran manuscripts, from Dimitri Andalaft, a well-known antiquary.

In the early centuries of the Islamic era, Iran became one of the most important centers of papermaking because it transferred the art of papermaking from the East to the West. Iranians learned the process of papermaking from the Chinese, who invented it during the Han Dynasty (260 BC – 220 AD). Iranian papermaking under Islamic rule was a pivotal advancement since the perfection of rag paper provided a smooth texture on which to create extravagant calligraphy and illustrations. Paper could be produced anywhere on a large scale since it was made from wood or cotton rags. Before the advancement of rag paper, other paper-like materials were in use, including papyrus, parchment, palm leaves, and vellum. However, they were expensive and in limited supply since they were derived from raw materials. Illuminated manuscripts evolved into such a prevalent art form in Iran that there were some cities in which papermaking was the population's primary economic concern. There was a city from the Yāqut period, during the twelfth and thirteenth centuries AD, called “Kāghaz Konān”, which literally means city of paper producers.

The Manuscript of “Yusuf and Zulaykha” by the Persian poet Jami depicts not only the intricacy of Islamic calligraphy, illuminations, and paintings, but also the extreme care that the various artisans took in penmanship, binding, and papermaking. Jami was born on August 18, 1414 AD and lived until November 19, 1492 AD. The text is written in a neat hand, in what is known as nasta’liq script. Chinese influence is not only apparent in the fact that this Islamic manuscript was made from paper, but also in the borders, which bear Chinese-inspired motifs. The manuscript, made during the fifteenth century in Iran, currently rests in the storage collections of the Penn Museum. The Manuscript of “Yusuf and Zulaykha” has been loaned four times. In 1932-33 it was loaned to the Pennsylvania Museum, now known as the Philadelphia Museum of Art, with a group of Persian manuscripts and Luristan Bronzes. In 1957 it went to the Virginia Museum of Fine Arts in Richmond, along with a small group of Persian artifacts. In 1975-76 it was on display at the Van Pelt-Dietrich Library along with 23 other Near Eastern objects. Finally, in 1997, it was lent to the Suzanne H. Arnold Art Gallery at Lebanon Valley College in Annville PA with 8 other Near Eastern objects for an exhibition titled, The Spirit of Ornament: Objects from the Islamic World.

Titled “Yusuf and Zulaykha”, the illuminated manuscript depicts in the Persian language a poetic love story of Joseph in Egypt. The cover is leather with a black and gold lacquer. Folio #19 has an image of the Prophet’s ascension of his winged horse. In folio #19 the face of the prophet ascending to heaven is veiled. It was common practice to veil the face of prophets, or symbolically represent their faces as flames. With the exception of modern-day Iran, depictions of the prophets were rare and appeared almost exclusively in the private collections of Persian and other miniature book illustrations.

The Penn Museum’s copy of this text only contains five undated miniatures. Nearly one hundred works are attributed to the Poet Jami, but only forty are recognized as authentic. Other folios from his various manuscripts are located in different museums, such as the Metropolitan Museum of Art in New York and the Smithsonian Institution (the Freer and Sackler Galleries of Asian Art). It is not uncommon for museums to only own sections of a manuscript. Private owners sometimes take apart manuscripts and sell, or donate, the individual folios. Some collectors even split the individual folio pages with illustrations on both sides and sell the two resulting leaves individually.

The tale of “Yusuf and Zulaykha” is about a handsome young man who resists the advances of an older woman. This is an archetypal story known throughout world literature. In the biblical version, the tale includes Joseph (Yusuf), who is sold into slavery and also strongly resists the advances of a woman, his master’s wife. In this rendition, Yusuf eventually becomes a high-ranking minister and marries Zulaykha since they shared a spiritual aspiration for unification. The Biblical version pushes the idea of resisting temptation and maintaining purity, whereas the Islamic one focuses on the ultimate symbol of the beloved, drawn from the Koran, in which women describe Yusuf as ‘not a man but a noble angel’. On another folio depicting the love poem, a group of Egyptian women cut not only through the oranges they are eating, but also their fingers. Over eighteen Persian poets are known to have portrayed this tale.

The poet Jami’s 15th-century masterpiece is considered one of the best versions of this delightful tale because it successfully blended important intellectual currents of medieval Islamic cultural life, such as the Greek-derived Islamicised cosmology, the philosophy of Ibn Arabi, and the poetry of Nizami. This weaving of various important aspects of medieval Islamic culture makes Jami’s work of literature one of the greatest mystical love stories of the Islamic world.

← Introduction – Things at Penn: The Social Lives of Near Eastern Objects at the University of Pennsylvania
Penn Museum Koran →
Manuscript of Yusuf and Zulaykha