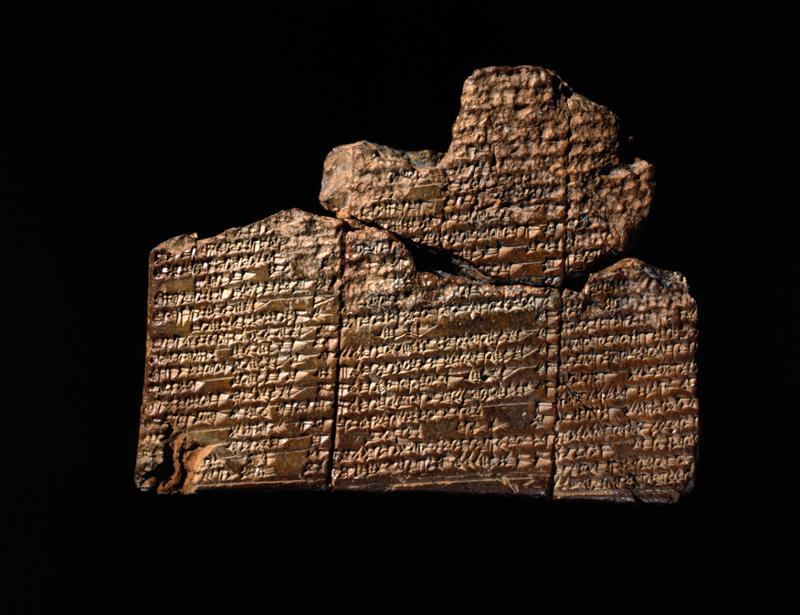 The University of Pennsylvania’s Museum of Archaeology and Anthropology houses impressive treasures that span history. Many of these treasures come from the Middle East, where Penn led pathbreaking excavations in the late nineteenth century and made discoveries that have continued to shape the way scholars narrate ancient Near Eastern history. Among these hundreds of thousands items excavated, the Penn Museum’s very first expedition in the 1890’s to the site of Nippur (in modern day Iraq) uncovered a piece of a Babylonian tablet written in cuneiform recounting a tale of a flood. Only about one third of the original tablet survives, though what we do have recounts a fascinating story.

Cuneiform, one of the earliest fully developed writing systems, came into practice out of economic necessity. Born in Sumer around 3200 BC, Sumerian leaders invented cuneiform to keep track of agricultural information. Beginning as a series of pictographs, cuneiform developed into lines of smaller and simpler icons, all carefully molded onto a wet clay tablet using a wooden stylus and then baked. The technology of cuneiform survived for over thirty centuries until it became extinct around 150 B.C. Scholars only recently revived the study of cuneiform amidst their efforts to understand Sumerian language.

Cuneiform in its heyday served many functions.  Near Eastern scribes used cuneiform to record everything, ranging from daily events to astronomy. Furthermore, cuneiform was taught to children in schools. This is evidenced by the expansive collection of cuneiform tablets that do not have a large variety of symbols carved into them but rather a lot of the same symbol. This shows that students were practicing writing cuneiform by continuously marking the same symbol over and over again. The Penn Museum actually has a lot of these tablets. Over time peoples throughout the entire ancient Near East made use of the cuneiform system to render their own distinct languages into writing. After all, cuneiform was a writing system of symbols. Its versatility was taken advantage of by many cultures neighboring Sumer. Most of the Mesopotamian civilizations used cuneiform including the Akkadians, Babylonians, Elamites, Hatti, Hittites, Assyrians and Hurrians until it was abandoned in favor of the alphabetic script at some point after 100 BCE. For over three millennia, writing and knowledge flourished in the Near East. Cuneiform promoted the spread and popularity of written language and more importantly, the recording of history.

This background enables us to understand the Penn flood tablet (Penn Museum Object B10673) more clearly.  This seventeenth-century B.C. “Babylonian Flood Tablet” was excavated at the site of Nippur, the very first expedition of any American museum in the late-nineteenth century. Located in modern-day Iraq, the site of Nippur (where Penn conducted extensive excavations) yielded mostly Babylonian and Sumerian objects, roughly spanning from 2000 B.C. through 900 B.C. This tablet written in Sumerian deals with the creation of humans, pre-flood cities and their rulers, and most notably, the flood. Also known as a “Deluge tablet”, scholars maintain that the fragment recovered was the lower third of the tablet with six columns of text (three on each side). The preserved columns each have around ten to fifteen lines. Scholars believe that the compete tablet would have had around 260 lines. Several preserved passages exist. One involves the giving of divine instructions to man, which state that cities must be built under the protection of specific deities. Five city names were preserved, including the port town of Eridu protected by Ea, the god of water. Another passage tells the story of Enki, who reveals to the king Ziusudra the gods' plan to destroy the human race with a flood. The flood inevitably occurs, accompanied by wind and storms, lasting for seven days and seven nights before the sun returns. King Ziusudra emerges from his boat and offers sacrifices to the gods. After Enki appeases the gods An and Enlil, they grant Ziusudra eternal life.

This tablet has traveled frequently since it entered Penn’s collection. For example, from 1982 through 1983, it resided at the Louvre Museum in Paris for the museum’s exhibit titled La Naissance de l’Écriture (meaning the Birth of Writing). In 1994, the Penn Museum lent it to the Arthur Ross Gallery at the Fisher Fine Arts Library at the University of Pennsylvania for the Exhibition in honor of Dr. Judith Rodin's installation as President of the University. Five years later in 1999, the museum lent the tablet to the Frank H. McClung Museum at the University of Tennessee in Knoxville as a supplement to the Penn Museum’s traveling exhibition that they were hosting titled Treasures from the Royals Tombs of Ur. In 2003, it was loaned to the Metropolitan Museum of Art in New York City for its exhibition titled Art of the First Cities: The Third Millennium B.C. from the Mediterranean to the Indus. In 2010, it went on exhibit at the Penn Museum for the school’s theme year, The Year of Water. The tablet is currently on loan to the Michael C. Carlos Museum at Emory University for their year-long Creation Stories Project.

Considering that the this clay tablet would have been written prior to the writing of the Bible, some observers have wondered whether this story may have influenced the biblical account. Evidence for this includes the fact that biblical tradition draws on a general Mesopotamian tradition of a flood, according to scholars. This could explain why this tablet has remained in high demand for museum exhibits: many people are interested in the Bible and its antecedents. Furthermore, this is the only Sumerian language account of the Flood.

The Penn Museum’s remarkable excavations in the Middle East led to incredible discoveries of monumental historical significance. The Babylonian Flood Tablet found at Nippur is itself significant in that it shows the practicality and importance of cuneiform in recording stories and events. It also undoubtedly helped scholars characterize Babylonian culture during the seventeenth-century B.C. Objects like these help us to understand the culture and ways of life of ancient and rich civilizations.