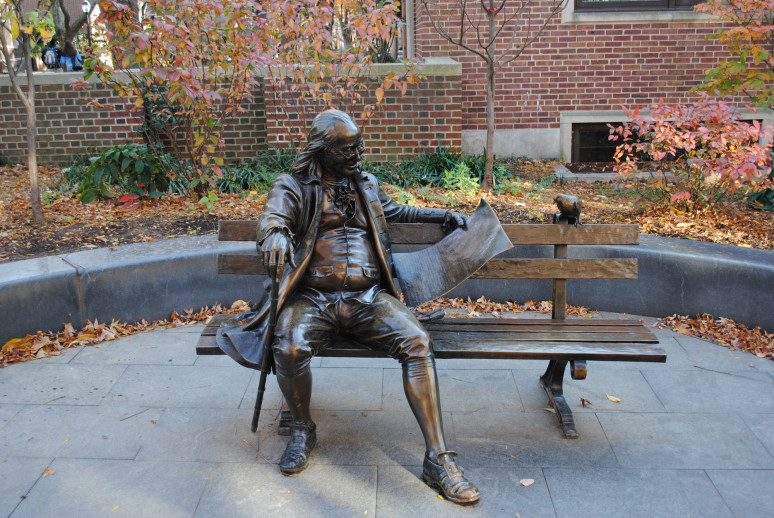 
The sculpture of the founding father, with a nickname “Ben on The Bench”, is a celebrity on Penn campus. It has been a tradition for university president and honorary degree recipients to take photo with him before commencement day every year. Even Hillary Clinton took photo with it during her visit to Philadelphia. Ben on The Bench has become a symbol of Penn and has a replicate in the newly opened Penn Wharton China Centre in Beijing, China.

A printer, an inventor, and founding father of the U.S.A, Benjamin Franklin is also an advocate for education program. He believes in practical education that train the youth to become leaders in business and public services in addition to in classics. In 1749, he published his famous essay, Proposals Relating to the Education of Youth, and circulated it among leaders in Philadelphia to assemble a board of trustees.

Apart from Ben on The Bench, two sculptures featuring the founding father are displayed in Penn.

Commissioned by Class of 1904, the sculpture was donated to Penn to memorize the founder of the university. The class choose to portray the young Franklin before he gets any wealth and fame to inspire young students on campus.

The creator, R. Tait McKenzie was from Canada. He was also a physician, educator and an athlete. He moved to United States in 1904 and taught at Penn as the Director of the Physical Education Department. His work Edgar Fahs Smith is also displayed in Penn. Located in front of the College hall and facing the Van Pelt Library, the Benjamin Franklin sculpture was one of the most iconic images of Penn. The sculpture was created by John Boyle, an American sculptor. Boyle studied at the Franklin Institute of Pennsylvania Academy of the Fine Arts. After studying at Ecole des Beaux Arts in Paris, he returned to Philadelphia and owned a studio on Walnut Street.