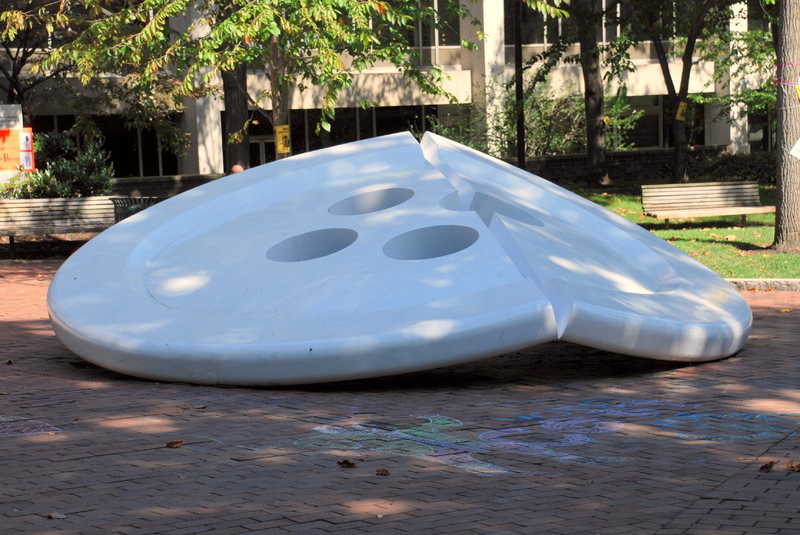 With its center location and bright and shining color, Split Button has been a landmark of the Penn campus. Everyday when students pass by it for class they can see tourist taking photo with it, classmates sitting on it, and children playing with it, getting themselves into the buttonhole. In early summer, Split Button is one of the most popular spot for graduations photos.

The sculptor, Claes Oldenburg, is an American artist known for his public installation of oversized everyday objects.  Oldenburg was born in Stockholm and grew up in Chicago, where his father worked as the Swedish diplomat. After finishing his study at Yale, Oldenburg returned to Chicago and then moved to New York, where he was part of the Pop Art Movement. In 1963, he moved to LA and started to pay attention on imaginary outdoor monuments two years later, finishing the Lipsticks in Piccadilly Circus, London (1966). Oldenburg in 1970s focused on public commissions, with works installed both domestically and internationally. The artist also has his famous Clothespin (1976) installed in front of the City Hall of Philadelphia.

The Split Button is 16 ft. in diameter and weighs 5,000 lbs. The initial reaction of the installation was mixed. While some students and faculty found it interesting and unique, the others found it wired, served no purpose and didn’t “in the least fit with its surroundings”. Over the time, however, it has become a inseparable part of the university.