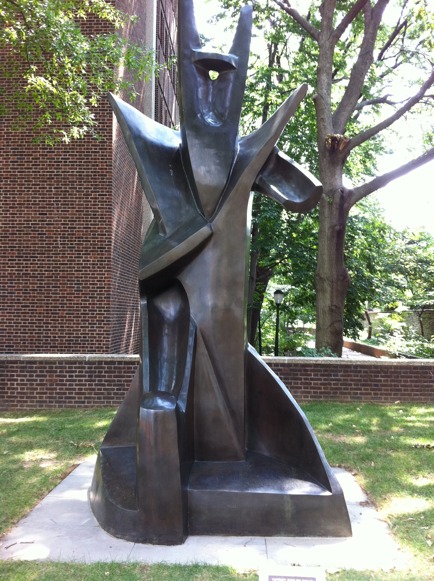 On the east side of 36th, between Locust Walk and Walnut, a giant abstract statue of King Solomon solemnly stands. Made by sculptor Alexander Archipenko in 1993, this bronze sculpture is gigantic in scale, with a height of 14 feet and a weight of 1.5 tons. It was brought to Penn’s campus in 1994 by Jeffrey H. and Sivia Loria, who are also the donors of the LOVE sculpture, to show homage to the inauguration President Judith Rodin.

The influential Cubist sculptor Alexander Archipenko did not normally work on a monumental scale. But shortly before his death in 1964, he completed a 4-foot King Solomon that was designed for enlargement. His widow followed his instruction and supervised the casting of this 14-foot version. The front of the statue is highly complicated, while the hidden back is an interesting juxtaposition of smooth and rough texture. The king’s bolt upright pose with the points of his robe framing his head suggests stern dignity. This contrast between the front and the back acts a powerful interpretation of King Solomon. King Solomon was a highly complex figure. He was acclaimed as great in wisdom, wealth and power, but also criticized as a king who committed the idolatry sin, leading his kingdom to be torn into two parts. Standing across from the Van Pelt library, the statue acts as a symbol of both knowledge and self-reflection.

King Solomon serves as an example of the diversity and impacts of the Cubism movement. When speaking of Cubism, people tend to think of Picasso and abstract oil paintings. However, as a huge avant-garde art movement in the early 20th century, Cubism actually revolutionized both European painting and sculpture, inspiring related movements in music, literature and architecture. Similar to Cubist painting, Cubist sculpture emphasizes reduction of objects into component planes and geometric solids, such as cubes and spheres. Cubist sculpture developed in parallel with Cubist painting, beginning in Paris around 1909 and kept evolving around the 1920s. Different from Cubist paintings, Cubist sculptures have the freedom to explore shapes, deconstruction and reconstruction in three-dimensional space. Therefore, cubism in the format of sculpture faces both more freedom and more challenges.

Alexander Archipenko, the creator of King Solomon, was one of the leaders in this movement. He incorporated futurism into cubism, and worked consistently at the problems within Cubist sculpture. Archipenko used colors, negative space and interaction between figures to create striking illusions of volumetric spaces. He also experimented with the dynamic interplay of convex and concave surfaces, which we see today in King Solomon. Alexander Archipenko was not the only one who added new blood to Cubist sculpture styles. Basing on the established experiences of Pablo Picasso and George Braque, artists such as Joseph Csaky, Raymond Duchamp-Villon, Umberto Boccioni and Jacques Lipchitz infused Cubist sculpture with more contents. They explored not only deconstruction on space, but also on time, movement, culture and ideology. The Cubism movement in sculpture diminished with the end of World War I, but the Cubist approach in sculpture doesn’t end. This approach serves as a fundamental influence to later developments in Constructivism, Purism, Futurism, Dada, Surrealism and Art Deco, all of which we observe frequently nowadays.

Cubism in ceramics and sculpture

East side of 36th, between Locust Walk and Walnut