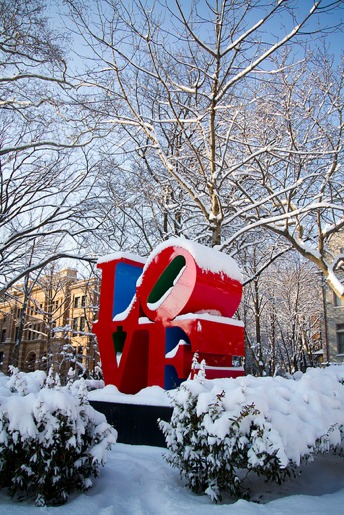 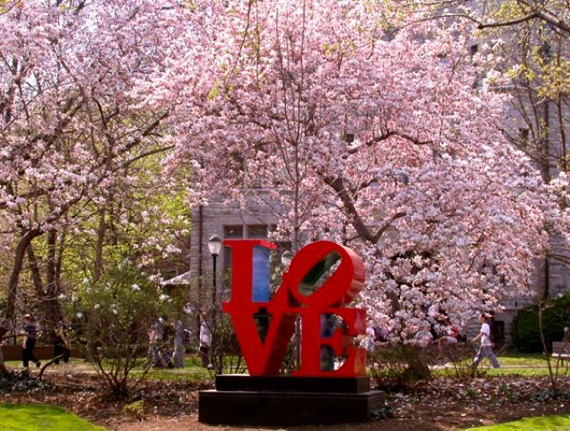 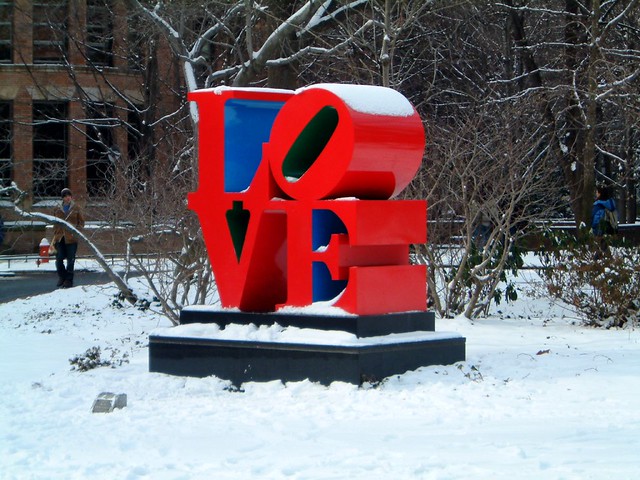 Love, the red aluminum sculpture gracing the triangular grounds on 36th and Locust Walk, is one of the icons of University of Pennsylvania. This piece at Penn is a part of the Love series create by pop artist Robert Indiana. There is controversy over the creation date of this particular piece. According to Penn’s official website it was casted in 1966. This piece was later purchased by Jeffrey Harold Loria and Sivia Loria, and then gifted to Penn in 1998. Jeffrey is an American art dealer who owns the Miami Marlins. He and Sivia are parents of a Penn student. From 1998 till today, LOVE remains one of the most favorite public arts on campus. Every year during May, student will gather around this sculpture to take pictures in celebration of their graduation. All four letters have bright red as their color on the outside. When observed close, letters “L” and “E” have blue inner colors, while “O” and “V” are green. This coloring can be traced back to the original graphic design in 1964. Nowadays, people are too familiar with the numerous sculpture variations around the world that they forget about the start of this series: a tiny postcard.

In 1964, Indiana created the design with tilted “O” for the first time as a Christmas card for the Museum of Modern Art. In an interview with the Mental Floss magazine, Indiana explained that the word LOVE was connected to his childhood experiences attending a Christian science church, “where the only decoration was the wall inscription God is Love.” Indiana also described the color choices as “an homage to his father”, who worked at a Philips 66 gas station during the Depression. The red and green are the colors of “that gas station sign” against the “blue Hoosier sky.” The first sculpture version was later built to be on display at the Indianapolis Museum of Art. From 1966 to 1998, Indiana created 19 renderings in sculpture in US and 22 others across the globe. The one at Penn is one of the larger versions compared to the original. LOVE soon becomes an icon for pop art and modern culture, spreading to Spain, China, Japan and Kyrgyzstan. In 1973, the United States Post Office even issued an eight-cent stamp featuring the “LOVE” design to celebrate its popularity. 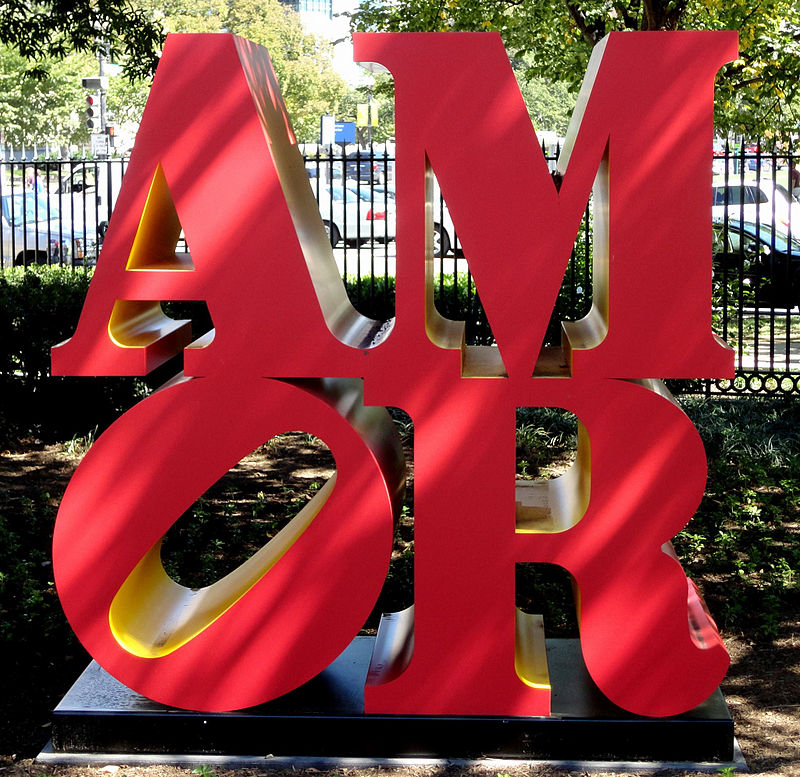 Just as every other symbols in pop art, LOVE experiences different variations and adaptations by both its original creator and other artists in countless forms. Indiana himself sculpted LOVE in foreign languages and international locations, such as AMOR (Italian) in Milan, and AHAVA(Hebrew) in Jerusalem. Some other artists took a more sarcastic approach. London artist D*Face parodied this image by sculpting HATE with a tilted A, while Belgian artist Eddy Gabriel made a version using the word LOST. These four iconic letters also appeared a lot in mass media: you can find them in TV series, anime, book design, video games and even Google Valentine’s Day logo. It is interesting that such parodies and adaptations of pop art pieces are so widespread, since pop art itself uses parodies of mass culture to challenge traditions. By employing aspects of mundane cultural objects, such as advertising and comic books, pop art expresses the attitudes behind the art rather than the art object itself. It’s probably the active and encouraging environment created by pop arts that facilitates conversations between modern artists. For example, Andy Warhol reproduces soup cans faithfully, including detailed labels and logos, in his work Campbell’s Soup Cans to criticize the modern commercialized world. Later, Warhol made adaptations on his own work, such as coloring the cans differently or draw damaged cans, to deliver new information. Re-interpretation on the soup cans series soon emerged, including cans floating in the universe or video art of actor dressed up as Warhol drinking canned soup. Such phenomena on Campbell’s Soup Cans or LOVE address how pop artists again re-construct originally reconstructed works, infusing the primary works with new information and carrying them to next level.

Is the Love statue on campus the original?

Top of the Pop: Andy Warhol and Pop Art