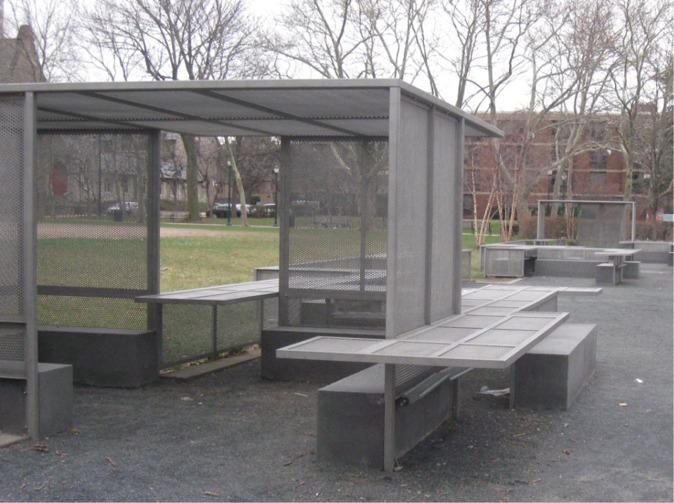 Standing on the east side of 40th street and north of Locust Walk, Plateau serves as a big shelter for Penn students and Philadelphia residents alike. Plateau was built by Andrea Blum in 2005 using concrete and perforated steel. It takes up a huge space of nearly 4800 square feet. Looking from distance, Plateau is an abstract and inconspicuous composition of grey cuboids. It is a highly functional art piece – for many people, too practical to realize that “these benches” is actually a modern sculpture.

Plateau was commissioned by Penn and the Redevelopment Authority of the City of Philadelphia for the Percent for Art program, which mandates that at least one percent of construction costs for municipal projects goes into original works of art. Andrea Blum, an American sculptor and architectural designer, was engaged in this program and made a three-dimensional puzzle named Plateau. Plateau has interlocking pavilions, varied tables and seats that provide space for both public and private interaction. It is a highly touchable and interactive art. There are always students gathering together under the shelter, or relaxed residents reading newspaper on the concrete seats. Different from those academic sculpture with clear boundaries and serious atmosphere, Plateau fits into the life of local students and residents, creating a little environment on its own.

Plateau is not the only public art that interacts intensively with viewers around Penn’s campus. If we walk to the front of Van Pelt Library, we will find children using the big Split Button as a playground, playing hide-and-seek around those giant holes. A few steps further to Locust and 36th, we can observe students taking pictures in groups around the LOVE statue to show their school pride. All these public art pieces serve as a connection between the mysterious modern art world and the lively local community.

In the center city of Philadelphia, we can see more interactive public arts in a more diverse environment: high-rise commercial and residential towers, shopping plazas, parks, hotels, schools and libraries. All these can be traced back to March 1959, when the Philadelphia Redevelopment Authority pioneered the Percent for Art Program. Since then, Philadelphia became the first city in United States requiring developers to commission art as part of the development process. This movement brings the city hundreds of public art in all areas, including the Plateau. In addition to traditional medium of public art, developers also commission projects that take less conventional forms, for example, community, art and culture based programs. The Percent for Art program encourages redevelopers to create work that engages the public and to discover new executions in public arts.

East side of 40th, North of Locust Walk