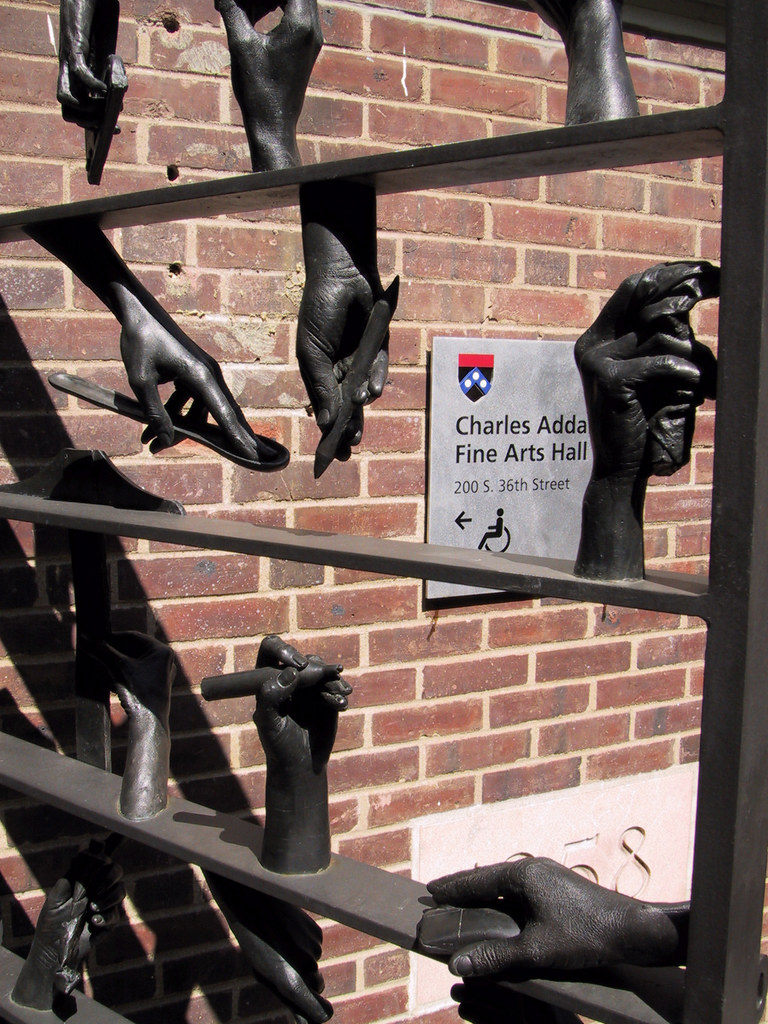 The Kelly Family Gates are located in front of the Charles Addams Fine Arts Hall (36th between Walnut Street and Locust Walk). The gates were designed by Mark Leuders in 2003 as a reference to Charles Addams, a Penn alumni and a renowned cartoonist. The Kelly Family Gates has two parts, with each part possessing the dimensions 6’7” x 3’10.” In addition, the gates have 8 horizontal bars supporting human hands engaged in artist endeavors. There are 56 bronze hands in total, each highly detailed and unique. With a closer look at the gates in person, one can see that the hands are engaged in photography, painting, sculpturing, all of which create the perfect greeting to visitors to the Fine Arts building.  All these hands hold a striking resemblance to one of Addams’ most memorable characters – Thing in Addams Family.

Thing T. Thing, often referred to as as just Thing, is a fictional character in the Addams Family series created by Charles Addams (1912 – 1988). Originally, the Thing character was supposed to be a creature that was too horrible to be seen in person with the only tolerable visible part of him being his human hand. Later, Thing was changed to a disembodied hand who offers services to the family like fetching the mail, lighting cigars, and changing the channel on TV. Thing was not the only macabre character that Addams created. Addams drew lots of stories and characters that are darkly humorous. He even utilized his college experiences at Penn as sources of inspiration – for example, he used the campus College Hall as a basis for designing the famous forbidding Addams Family Mansion for the Addams Family television series.

In 2002, Mark Leuders (GFA’93), a lecturer in Fine Arts, was selected to design the new Fine Arts hall gate. He chose to replicate Thing as decoration, since this character reflect both Addams’ quirky sense of humor and the creativity that takes place inside the Addams Wall. Each hand was cast from the actual hands of professors from Penn Fine Arts. While some of them hold symbols associated with traditional art, such as the pen and pencil, others hold a tablet or a mouse in reference of modern tools. These hands both embody the nature of Addams Hall and blend into the background environment.

These gates serve as a perfect example of how cartoons can influence mainstream and traditional art. Even though the notion of the “cartoon” emerged as early as the Middle Ages, the comic strips and humorous illustrations that we are familiar with were not developed until the 19th century. At first, cartoons were made in the traditional fine arts style. The earliest cartoons were similar to academic oil paintings or ink drawings. They had precise proportion, realistic characters, detailed shading, and well-balanced layouts. It was later in the 20th century that the cartoon began to develop its unique, simple and exaggerated style.

For a long time, the cartoon had been overlooked in art history because it was considered as a “less serious” or “more commercial” art form. As the cartoon evolved and contained more information, fine artists begin to seek inspiration from the highly stylized cartoon arts. In the 1960s, as pop artists became interested in subjects such as commercialization and media, the comic strips began to exert its heavy influence on mainstream art. For example, Roy Fox Lichtenstein, an American pop artist, produced hard-edged, precise compositions of cartoons to create parodies. He created works such as Whaam!  and Jeff…I l Love You, Too…But… that we are familiar with today. This movement continued, and impacted artists around the world. The movement was not limited to America, as European and Asian artists also joined the movement. For example, Takashi Murakami, an internationally prolific contemporary Japanese artist, took figures from Anime to create controversial sculptures and illustrations such as Hiropan. As the cartoon began to impact traditional art, the line between “high” and “low” art blurred, which paved the way for more genres and styles to develop.

Lichtenstein’s defense on his art format