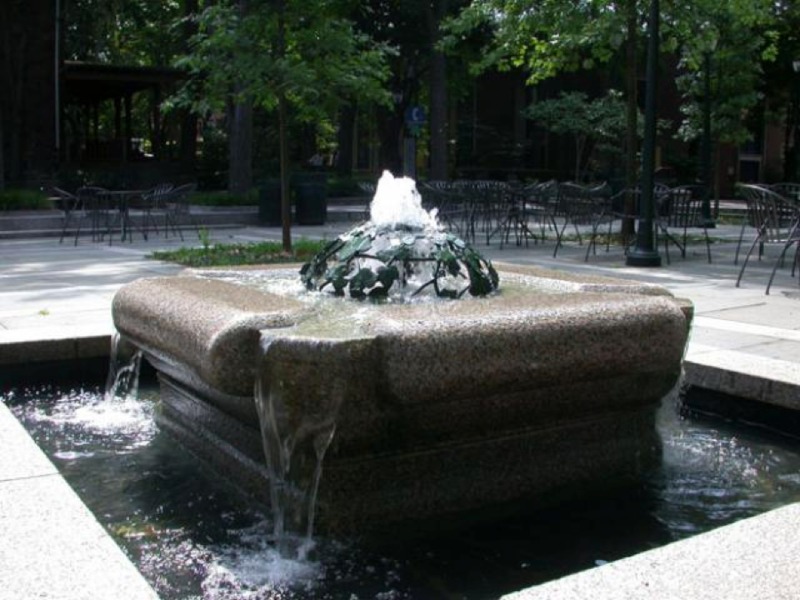 Lindemann Fountain was built in memory of Joseph S. Lindemann by Delia Bentivogli and Robert Lundrgen in 1985. It is an outdoor fountain located in the small park on the Northwest corner of 37th and Locust Walk, taking a gross area of 42’ by 72’ by 72’. This small fountain has a two-piece granite basin with a bronze ivy leaf dome. The semi-circular leaf design at the center shelters the water spout. The whole piece is set within a square granite pool lined in a mirror-like black smooth stone. This fountain, overall, delivers a feeling of serenity through its delicate design and class materials.

Interestingly, not too much can be discovered about the listed two creators. Neither Delia Bentivogli nor Robert Lundrgen appears to be significant sculptor or artist. Joseph S. Lindemann, on the contrary, is a successful business person and philanthropist with certain degree of famousness. Lindemann was born in Manhattan and graduated from the Brooklyn College of Pharmacy. He worked largely in the cosmetics and pharmaceuticals industry. Lindemann established the Nestle-LeMur Company in 1927. Due to a merger in 1958, he became president of Smith, Miller & Patch Pharmaceuticals Inc. After Lindemann’s success in business, he established and financed research laboratories at various universities, both in United States and internationally.

From Lindemann’s public life story, no direct connection with either the University of Pennsylvania or the two creators can be spotted. It is highly probable that a personal issue leads to the construction of this fountain. One of the possibility is that the two creators were students who received help from Mr. Lindemann, and then commissioned artists to finish the piece to express their appreciation. However, this is only one of the many possible guesses, and the true reason remains to be discovered.

Nowadays, we observe many fountains around city parks and squares as decorations just as Lindemann Fountain. Back in their originality, fountains were built purely to be functional, providing water for urban residents. Until the late 19th century, most fountains were still operated by gravity, which needed a source of water higher than the fountain. Gradually, fountains become decorations or celebrations of specific figures. In the roman age, bronze figures of people, animals and plants began to emerge on fountains, which are similar to what we observe today in Lindemann Fountain. By the end of 19th century, as plumbing became more prevalent, urban fountains became purely decorative. In the modern age, people combine music, colored lighting, mechanics and computer control into fountains to make them more entertaining.

Besides their functionality, fountains also serve as a topic in fine arts. They are reoccurring symbolic objects in religious and political paintings to praise prolificacy and peace. In the 20th century, some modern art also features and reconstructs the concept of fountain, for example, the famous porcelain urinal named Fountain by Marcel Duchamp in 1917. Even though fountains are an ancient creation, they still serve as an important part in our cultural life today.

Thirteen Moments in the History of Fountains