This set of armor, beautifully engraved and partially blackened, silvered and made of gilded steel and leather was constructed for Duke Julius of Brunswick-Wolfenbüttel, around 1560. The gilded monogram on the torso of the armor indicates who it was made for, and perhaps also had the functional role of allowing a body to be identified by his armor after a battle (a heraldic device). The fact that this armor is ‘field armor’ indicates that it was not meant only for show but had a functional purpose as well. Nevertheless, the intricacy that not only went into constructing the monogram, but also into the decorative elements which adorn the armor (particularly the head and the chest piece) highlights the importance of aesthetics in battle gear, something that was so central in the lives of Medieval dukes. In other words, the intricate decoration of such an item suggests how important it was to its owner – humans have an urge to decorate items they use frequently and treasure. The embellishment of something so crucial to a medieval man’s way of life – an instrument of defense – therefore highlights its wide social significance.

Made in northern Germany

Learn more about this object at the PMA here 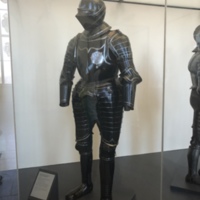