Pan with Sundial by Beatrice Fenton, 1938 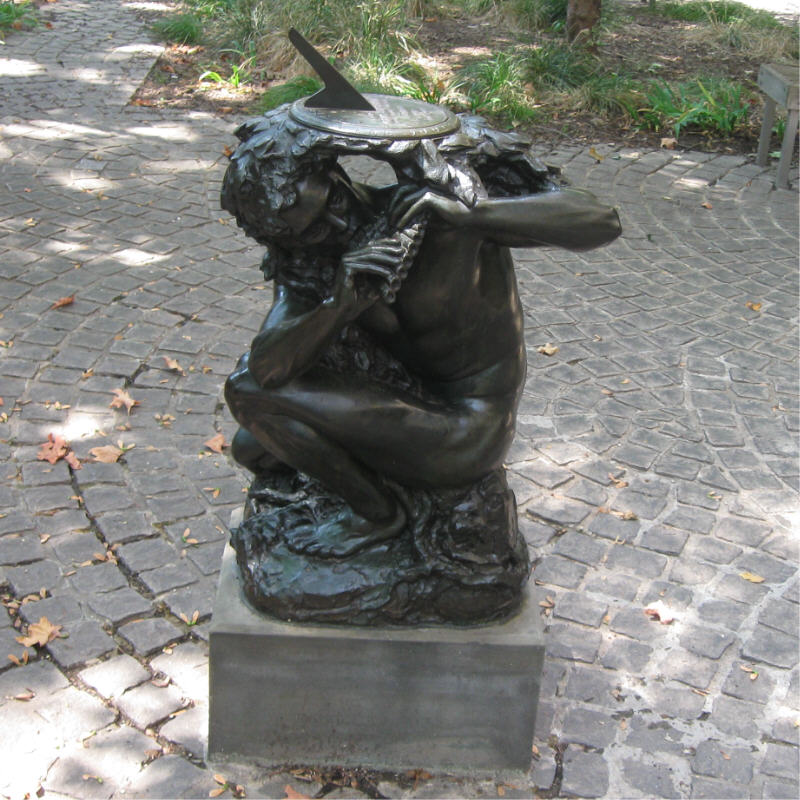 Pan with Sundial depicts a nude man squatting, carrying a sundial on his left shoulder while playing reed-pipes. His left arm was raised high and his head was turning left to support the sundial to be perfectly flat. The original gnomon was lost in transport. In order to keep its functionality, the university restored the gnomon based on research and guesswork.

The sculptor, Beatrice Fenton (1887-1983), was the daughter of Thomas H. Fenton and Lizzie Remak Fenton. Fenton studied at Pennsylvania Academy of Fine Arts. She the taught at the Moore College of Art and had her own studio at 1523 Chestnut Street, Philadelphia.

Fenton’s most well-known work was the Seaweed Girl Fountain (1920). Commissioned by a businessman, the fountain was donated to Fairmount Park. Later Fenton was asked by the Park Commission to add decoration of a coral reef surrounding by swimming angelfish, and she did. The Seaweed Girl Fountain won the Pennsylvania Academy of the Fine Arts’ Widener Gold Medal in 1922. It is now displayed in the Fairmount Park.

Pan with Sundial was donated by Mrs. William Stansfield in memory of her husband, who graduated from School of Arts & Sciences in 1902.

East of the main entrance of the Penn Library. Woodland Walk, West of 34th.